The big storm that forecasters have been warning us about, hit with full force here on the eastern side of the Berkeley Hills. We just regained power after a 2-1/2 hour outage. I suspect that we are one of the lucky ones. There are reportedly over 200 separate locations in the Bay Area that will require work. We have had very high winds and have had 4 inches of rain since yesterday. A portion of an old fence on our property blew down. We have two sump pumps going, now that we have power again, and so far so good. But there is a torrent pouring down the hillside behind us. If I get a chance, I will go out and take a picture of our “waterfall.” It is still blowing and raining and more rain is predicted. This is actually a series of three storms that are moving into California. We haven’t had such a big storm since the New Years’ storm of 2006. I hope Christine at Winnowings on her island in the Delta is okay. Now I’ll go check on the pumps!

Wow! You have been slammed, haven't you? The little drizzle we had about 1pm was it so far. Nary another drop. 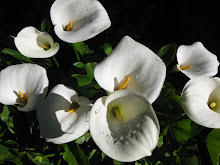